The term "T-shirt" has been part of dictionaries for about a century. The first few T-shirts were made and used more than a hundred years ago, and their popularity is only growing over the years. Forget about an evening dress or a tuxedo, a plain or printed T-shirt can completely change your look. Many times this simple piece of clothing has turned around heads. It received a lot of attention at fashion events as well.

What is your favourite T-shirt? Casual or designed, funny or political, one that depicts your favourite music band, character, place, joke or a quote? There are vast possibilities. In fact, the global market produces more than 13 billion T-shirts a year, with Americans alone buying 2 billion each year. And how did this modest underwear become that indispensable item we all have in our closets? We can thank the rebels, the rockers, the political movement, and Mickey Mouse.

T-shirt as an undergarment

What we know today as a T-shirt was first introduced by Cooper Underwear Company around the year 1904 as a "singles’ shirt". A stretchy undershirt that does not require buttons, i.e. a piece of clothing that does not need to be mended, intended for single men without sewing skills. With the new knitting technology, cotton shirts could be mass-produced and were much more comfortable. That is, in comparison with the then very modern flannel ones. For pioneers at the time, such as P.H. Hanes Knitting Company and Fruit of the Loom, the business started flourishing in an instant.

The T-shirts were cheap, comfortable as well as easy to wash. Thus, they quickly became an indispensable piece of underwear for many young men in America. They were first used en masse in the U.S. Navy and then by workers in many industrial and construction lines. At first, workers used them as undergarments. However, during hot days they started working dressed only in T-shirts, making these shirts very popular workwear.

Although most manufacturers at the time also advertised the T-shirt as a "sports or leisure shirt", "real men" only used it as an undershirt. That is, until the Hollywood Rebels came along.

In the 1950s, rebellious Hollywood stars turned a work shirt into a fashion icon. Is there anyone among you who doesn’t know the role of Marlon Brando in the movie A Street Car Named Desire or the iconic James Dean in Rebel Without a Cause? With appearances in these famous films, wearing a T-shirt soon became not only acceptable but also "cool". 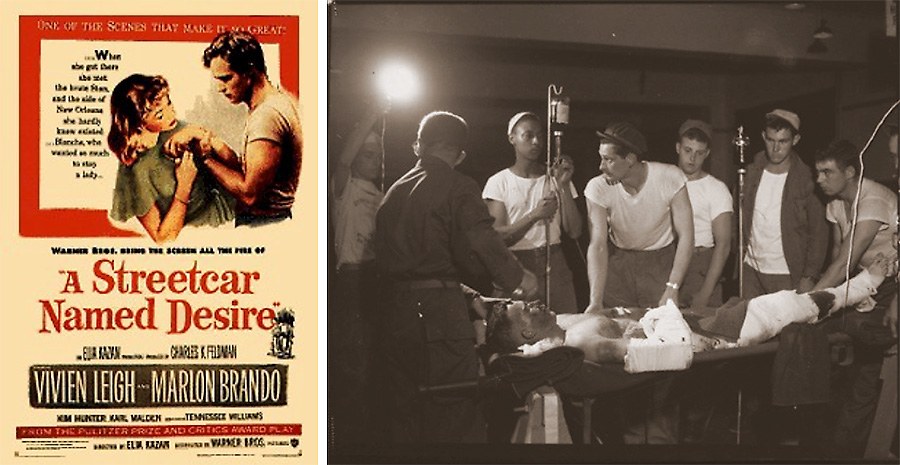 Around the same time, advances in screen printing opened up new opportunities for shirt printing. Shirt printing has become durable, affordable and of high quality. Many companies, primarily based in Florida, have started applying resort names and signs to T-shirts. Thus, printed shirts have become a very desirable souvenir. Tropix Togs company, with its first Mickey Mouse T-shirt, launched an avalanche of licensed shirts from the fields of film, music and entertainment.

Years of the final implementation

In the 60s and 70s, the T-shirt became the ideal base for "wearable art". Due to technological advances, printing shirts has become easy and cheap. People have also started using them to express their views and thoughts. Shirts with inscriptions have become an art and an expression of the thinkers.

During this period, many famous shirts emerged that became a symbol of the times and generations. The T-shirt with the Flower Power movement tie, the political shirts with their anti-war messages, and the provocative slogans of the punk movement, just to name a few.

Women adopted the T-shirt as their own in the 70s, and so it became unisex. A little later, the shirts also became two-coloured, and companies like Coca-Cola found potential for advertising in them. Over time, the promotional T-shirt has become one of the most popular promotional items.

This period also created evergreen T-shirts. Such as rock band logos (Rolling Stones, Pink Floyd …), bright yellow T-shirts with a happy face (Smile) and Milton Glaser's unforgettable "I ♥ NY" T-shirt, to name a few. These shirts are still a market hit today. Even top designers such as Yves-Saint Laurent have included high-fashion T-shirts in their collections. In most cases, these differed from the classic ones only in price. 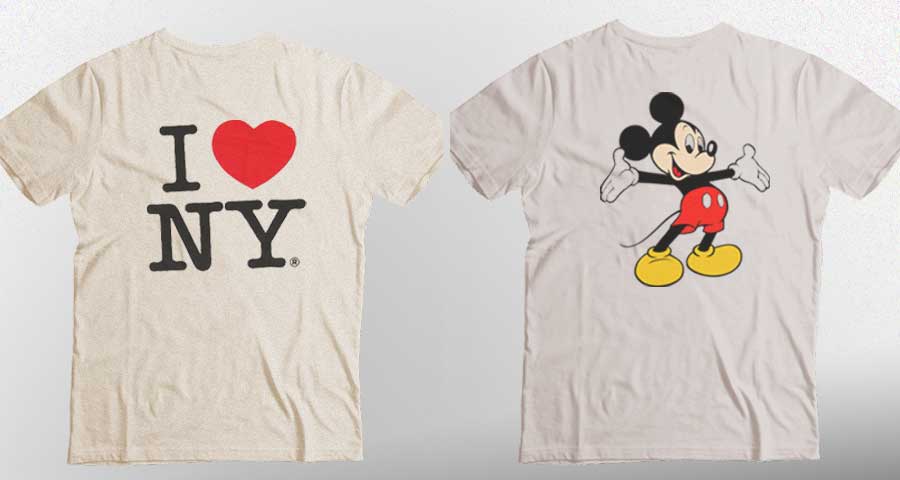 10 more fascinating facts about T-shirts and their history

MThe T-shirt is simply sexy, comfortable, versatile and affordable. It is popular among Hollywood stars, musicians, models, intellectuals, and everyday men, women, and children. Today, custom-made T-shirts express numerous things. They show our political views, unite us in our goals, remind us of our favourite memories, or make people around us laugh.

Today, DTG (direct to garment) printer technology enables the making of high-quality and unique T-shirts for a very reasonable price. This solution leads to boundless creativity in designing your own T-shirts and thus their powerful message value. The T-shirt has been a messaging medium throughout its history, and now, with new technologies, just about anyone can share their viewpoint for little money. 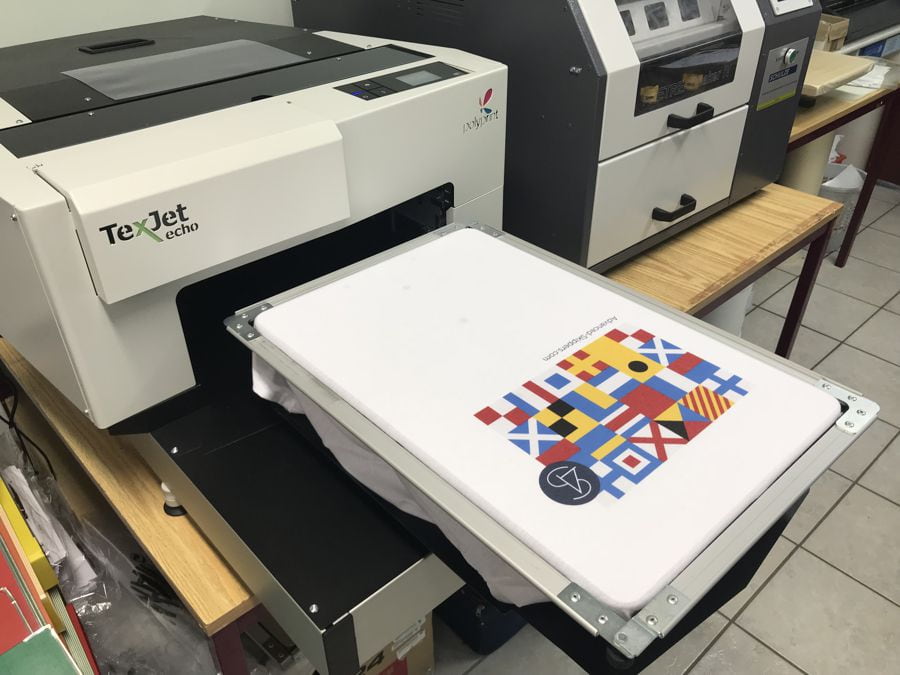 In recent years on many sites, you can design your unique T-shirt using some special applications. These sites have become very popular. After finalizing the design, the company delivers the shirt to your home. Designing is simple and requires no special knowledge. One such site is also giftshirts.eu, where they have been making quality printed T-shirts for years.

T-shirts as a great advertising tool

Do you use T-shirts for advertising your business? If not yet, you should definitely try it out. Let us list just a few facts in favour of this claim. If your customer has a nicely designed and high-quality T-shirt of your company in their wardrobe. If they wear it every now and then, your company will assuredly be noted positively in their thoughts. By the time they have your T-shirt on, however, they become your travelling billboard and spreads your message or brand all around. This is definitely a very affordable advertising solution.

However, the quality of T-shirts and the print, which must be enthralling and fashionable, are crucial factors when gifting with promotional T-shirts. As there is a thin line between your business partner wearing a T-shirt or leaving it to lie in a closet. The Habeco promotional gifts brand has more than 30 years of experience in printing and selling promotional T-shirts. The company have thousands of satisfied customers. That has ensured that you and your gift recipients will be happy to wear promotional T-shirts for a long time.

Visit our Habeco Gifts website where we publish articles about gifts and gifting.